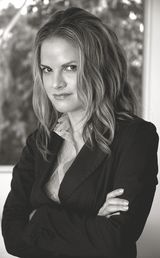 Andrea Portes is the bestselling novelist of two critically lauded adult novels, Hick, her debut, which was made into a feature film starring Chloë Grace Moretz, Alec Baldwin, Blake Lively, Eddie Redmayne, and Juliette Lewis, and Bury This. Her first novel for young adult readers, Anatomy of a Misfit, was called “perfection in book form” by Teen Vogue. Her other YA novels include The Fall of Butterflies and Liberty: The Spy Who (Kind of) Liked Me. Andrea Portes’s spooky, timeless middle grade debut is Henry & Eva and the Castle on the Cliff.

Andrea grew up on the outskirts of Lincoln, Nebraska. Later, she attended Bryn Mawr College. Currently she lives in Los Angeles with her husband, Sandy Tolan, their son, Wyatt, and their dog, Rascal. You can visit her online at www.andreaportes.squarespace.com.