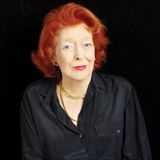 Theodora "Teddy" Getty Gaston, born in Chicago in 1913, began singing at the age of sixteen in the chorus of J. J. Shubert's Arms and the Maid and, in the twenties, performed as a torch singer in New York's most prestigious supper clubs. She studied opera in Europe and worked for the New York Herald Tribune during World War II. After a long romance, she married J. Paul Getty, with whom she had one child. During their eighteen-year marriage, Teddy acted in Forgotten Women and Billy Wilder's The Lost Weekend, and she started a water company, a candy company, and a children's charity in her son's name. In 1990, she wrote her first book, The Mark of the Eagle.