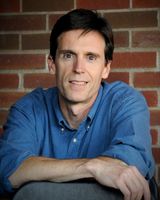 Tom Isbell is an actor-author-professor. A graduate of the Yale School of Drama, he has acted in theater, film, and TV, working opposite Robert De Niro, Ed Harris, Sarah Jessica Parker, and others. Currently a theater professor at the University of Minnesota Duluth, he has had three of his plays produced by the Theater for Young Audiences at the Kennedy Center for the Performing Arts, including Teddy Roosevelt and the Treasure of Ursa Major, which was adapted into a book with then–First Lady Laura Bush penning the foreword. Tom and his wife, Pat, live in Duluth, Minnesota.