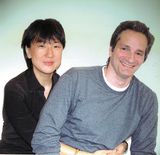 Susan is also a five-time Emmy nominee for her work in children's television and a Writers Guild Award winner for best documentary. She wrote the stage adaptation of Amy Tan's The Joy Luck Club, teaches writing at Goddard College, and is a blogger for the Huffington Post. When she was growing up, her family moved a lot, and the combination of being a) shy, b) the constant new kid, and c) the only Asian meant she was often picked on. In Guardians, she explores her thoughts and feelings about not just bullies but how others deal with them . . . and learn to stand up for themselves.

Laurence has also written the novels The Cutting Room, The Shooting Script, and the Edgar Award-winning Mrs. White and a short-story collection, The Family Unit and Other Fantasies. He received two Drama Desk nominations for the book and lyrics to Bed and Sofa, a musical produced by New York's Vineyard Theatre. Laurence was the baby in his family, the youngest of four brothers; even his twin brother was two minutes older. He learned that having little expected of you can be a source of power. So does Esther in Guardians: she has to finally accept being a leader of people before it's too late. She is sixteen, after all.