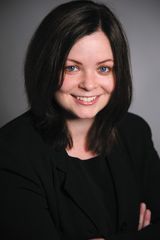 S. J. Kincaid was born in Alabama, grew up in California, and attended high school in New Hampshire. She also interned for a politician in Washington, DC, and received degrees from universities in Illinois and Ohio, but it was while living beside a haunted graveyard in Edinburgh, Scotland, that she realized she wanted to be a writer. Several years, several manuscripts, and several jobs later, Ms. Kincaid now lives in California, and Catalyst is the conclusion to the Insignia trilogy.