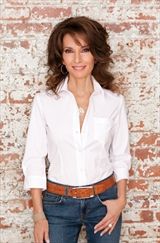 Susan Lucci won the Emmy Award for Best Actress for her role as Erica Kane on ABC’s All My Children in May 1999, garnered a star on the Hollywood Walk of Fame in January 2005, and was inducted into the Broadcasting Hall of Fame in 2006. Named one of Vstrong’s 200 Top Icons of All-Time and one of Barbara Walters’s Ten Most Fascinating People among her many honors, she lives in Garden City, New York, with her husband, Helmut Huber.