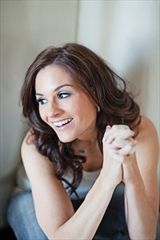 A Grammy-nominated, 2011 NAMM Music for Life Award winner, 2009 NMPA Songwriter Icon Award winner, and 2007 BMI Pop Songwriter of the Year, Kara DioGuardi has songs that have appeared on more than 160 million albums. Kara also serves as executive vice president of talent development at Warner Bros. Records and co-owns Arthouse Entertainment. In 2011, she made her Broadway debut in Chicago as Roxie Hart. She lives in Los Angeles and Maine with her husband, Michael McCuddy.