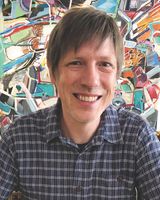 Jeff Mack spent most of his childhood drawing monsters, making comic books, and building haunted houses in his basement. He has spent most of his adulthood doing the same things. Since 2003, he has written and illustrated a long list of award-winning picture books, chapter books, and early readers, including the Clueless McGee series, Good News, Bad News; Hush Little Polar Bear; Duck in the Fridge; and Frog and Fly. He has also illustrated many books for other authors, including James Howe’s Bunnicula and Friends series and Eve Bunting’s Hurry! Hurry! At home in Northampton, Massachusetts, he travels both nationally and internationally visiting schools and libraries to talk with kids about creating books.