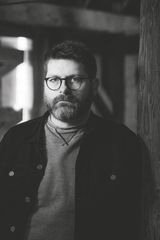 Colin Meloy is the writer of the bestselling Wildwood Chronicles and the singer and songwriter for the band the Decemberists. The Golden Thread: A Song for Pete Seeger is his first picture book. He once joined Pete Seeger onstage, singing American folk standards at the Newport Folk Festival in 2011, and even now, he can barely believe it actually happened, it was so cool. He lives just outside Portland, Oregon, with his family.