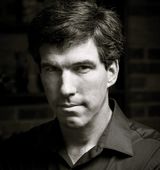 Benjamin Busch is a United States Marine Corps infantry officer, photographer, film director, and actor whose many roles have included Officer Anthony Colicchio on the HBO series The Wire. His writing has been featured in Harper's and has been twice nominated for the Pushcart Prize. He has also appeared as a guest commentator on NPR's All Things Considered. He lives on a farm in Michigan with his wife and two daughters.