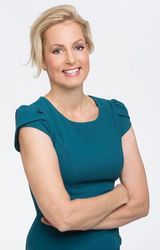 Ali Wentworth is the author of Ali in Wonderland and Happily Ali After. The star of the comedy series Nightcap, she made a name for herself on the sketch comedy show In Living Color, and her film credits include Jerry Maguire, The Real Blonde, Office Space, and It’s Complicated. A native of Washington, D.C., she lives in New York City with her husband, George Stephanopoulos, and their two daughters. Follow Ali on Twitter: @AliEWentworth