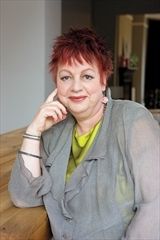 A former psychiatric nurse, stand-up comic Jo Brand has a large following throughout the UK. Her TV series Through the Cakehole and All the Way to Worcester met with great acclaim, and in 2003 she was listed in The Observer as one of the fifty funniest acts in British comedy. She is currently cowriting and starring in the BBC Four sitcom Getting On. Brand has written three novels and two humor books, is married with two children, and lives in South London.