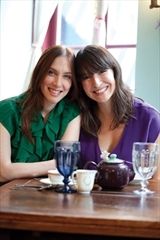 Lauren Fox started her career as an actress and a writer, splitting her time between Los Angeles and New York, before opening Alice's Tea Cup with her sister. She has appeared in many independent films, such as Pi, Revolution Summer, and Noon Blue Apples. She now juggles her time between acting, writing, and Alice's. She lives in Manhattan.