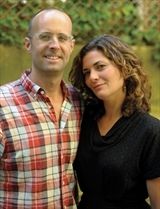 Melissa Vaughan is a recipe developer and tester whose work has appeared in magazines (Real Simple, Cookie, Saveur, Every Day with Rachael Ray) and cookbooks by Daniel Boulud, Michael White, and Melissa Clark. She is a graduate of the Institute of Culinary Education.

Brendan Vaughan is the senior articles editor at GQ and previously worked at Esquire, where he oversaw much of the magazine's food coverage. The Vaughans live in Park Slope, Brooklyn, with their son and daughter.