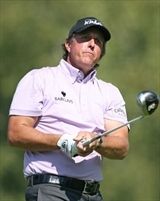 Phil Mickelson followed an outstanding amateur career with a brilliant assault on the PGA Tour, compiling 36 PGA Tour victories by 2009 (second among active players), including three major championships: the Masters Tournament in 2004 and 2006 and the PGA Championship in 2005. He has played on seven U.S. Ryder Cup teams and seven U.S. Presidents Cup teams. Mickelson is in the prime of his career, and his short game is without peer in golf today.