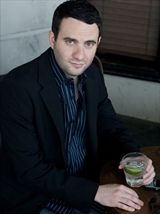 Aaron Karo is the author of Ruminations on College Life and Ruminations on Twentysomething Life, and has been writing his celebrated email column Ruminations since 1997. Also a nationally headlining comedian, Karo has performed on The Late Late Show with Craig Ferguson, and Comedy Central Records released his latest stand-up album, Just Go Talk to Her, in 2008. Originally from New York, Karo lives in Los Angeles, where he runs Ruminations.com, the web site he founded to make sure no one gets anything done at work.