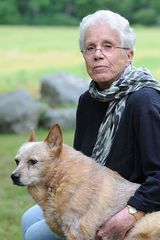 One of the most widely read American anthropologists, Elizabeth Marshall Thomas has observed dogs, cats, and elephants during her half-century-long career. In the 1980s Thomas studied elephants alongside Katy Payne—the scientist who discovered elephants' communication via infrasound. In 1993 Thomas wrote The Hidden Life of Dogs, a groundbreaking work of animal psychology that spent nearly a year on the New York Times bestseller list. Her book on cats, Tribe of Tiger, was also an international bestseller. She lives in Peterborough, New Hampshire, on her family's former farm, where she observes deer, bobcats, bear, and many other species of wildlife.