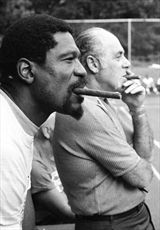 Five-time NBA MVP and twelve-time All-Star, Bill Russell was the centerpiece of the Celtics dynasty that won eleven NBA championships. As a major league coach, Russell won two additional championships—the first African-American to do so. He is considered the father of the modern pro game and one of the most significant Americans of the twentieth century in sports. His three previous books include the national bestseller Russell Rules.