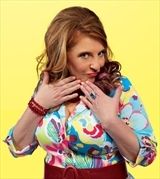 Lisa Lampanelli skyrocketed to comedy fame thanks to her stellar performances on the Comedy Central roasts of Jeff Foxworthy, Pamela Anderson, William Shatner, and Flavor Flav, among others. A regular guest on The Tonight Show and The Howard Stern Show, Lisa continues to sell out theaters across the country with her sweetly served but acerbic stand-up wit. Her CD/DVD Dirty Girl was nominated for a Grammy for Best Comedy Album in 2007 and her first HBO special, Long Live the Queen, premiered to spectacular numbers in 2009. This fall, she will shoot a one-hour stand-up special for Comedy Central, scheduled for release in early 2011.