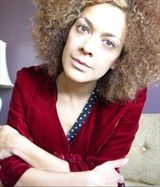 Tracy McMillan is a film and television writer, most recently on AMC's Emmy Award-and Golden Globe-winning series Mad Men, and before that on Showtime's Emmy Award-winning series The United States of Tara, the ABC drama Life on Mars, and the NBC drama Journeyman. She lives in Los Angeles with her fourteen-year-old son.