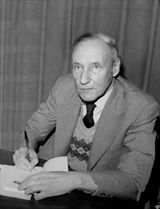 Born in 1914 to a wealthy family in St. Louis, Missouri, William S. Burroughs was one of the most significant people in twentieth-century American popular culture and literature. A novelist, poet, and essayist, he was a primary member of the Beat Generation, influential upon such writers as Jack Kerouac and Allen Ginsberg. Burroughs was the author of eighteen novels and novellas, six collections of short stories, and four collections of essays, among them the 1959 classic Naked Lunch. After living in Mexico City, Tangier, Paris, and London, Burroughs finally returned to America in 1974. He died at his home in Lawrence, Kansas, in 1997.

Bill Morgan is a writer and archival consultant. His previous books include The Typewriter Is Holy: The Complete, Uncensored History of the Beat Generation; I Celebrate Myself: The Somewhat Private Life of Allen Ginsberg; and Beat Atlas: A State by State Guide to the Beat Generation in America. He has edited several collections of letters by Beat writers such as Jack Kerouac, Allen Ginsberg, Gregory Corso, and Gary Snyder. Morgan has worked as the archivist of many writers, including Lawrence Ferlinghetti, Allen Ginsberg, Oliver Sacks, Michael McClure, Abbie Hoffman, and Arthur Miller. He currently lives with his wife in an old farmhouse at the base of a Vermont mountain.