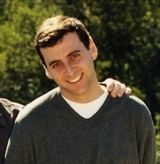 When his younger brother was born, Willie Goldman couldn't pronounce "Jeffrey." It came out "Duff," and the name stuck. A screenwriter and producer, Willie began his career at NBC Burbank, where he worked on The Tonight Show with Jay Leno, The Fresh Prince of Bel-Air, Later with Greg Kinnear, and Hang Time, and then moved on to Warner Bros. Television, where he worked on the Emmy-winning drama E.R. for seven seasons. Willie also wrote an adaptation of the acclaimed James Crumley novel The Last Good Kiss. The co-creator and coexecutive producer of Ace of Cakes, Willie lives in Los Angeles.