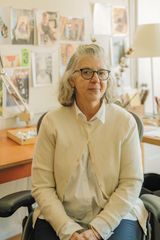 Maira Kalman is the illustrator of The Elements of Style by William Strunk Jr, the author of My Favorite Things, Principles of Uncertainty, and the bestselling And the Pursuit of Happiness, and the author/illustrator of numerous children's books. Her artwork has graced multiple covers of The New Yorker, and her watches, clocks, accessories, and paperweights have been featured at the Museum of Modern Art store. She lives in New York City.

Alex Kalman is a designer, curator, writer, and creative director. He is the founder, director, and a chief curator of Mmuseumm, a new type of museum described as "curatorial genius" by The Atlantic and "one of the top twelve hidden art gems in the world" by the New York Times T Magazine. He also published the very first ever Op-Object column in the New York Times. His artwork, films, installations, and exhibitions have been shown at the Museum of Modern Art, the Venice Architecture Biennale, and the Metropolitan Museum of Art. His latest project, Future Aleppo, was on exhibit at the Skirball Cultural Center in Los Angeles, and will open at the Victoria & Albert Museum in London in 2018. He lives in New York City.