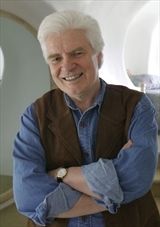 Roger Dean is internationally acclaimed as an artist and designer whose evocative and visionary images created a new genre. Made popular through the medium of album covers and posters, his work has sold in excess of 100 million copies. Roger became widely known in the 1970s for his album cover designs for Yes—including the classic logo now in the Victoria & Albert Museum in London—and a poll of Rolling Stone readers selected five of his designs in the top twenty best album covers of all time.