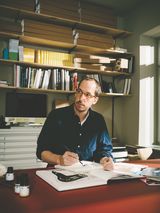 After completing his studies at the Stuttgart Academy of Fine Arts, Christoph Niemann moved to New York City, where he worked as an illustrator, animator, and graphic designer. His work appears regularly on the covers of The New Yorker, National Geographic, and The New York Times Magazine. His art has also been subject to numerous museum retrospectives and his TED Talk has received millions of views. Christoph Niemann lives in Berlin, Germany and Brooklyn, New York.