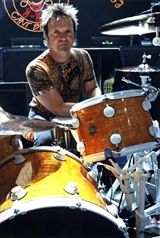 Joey Kramer is the legendary drummer with the most successful band in American history—Aerosmith. Since 1970 he and his partners have sold over 150 million albums, and today their multigenerational, global audience is bigger than ever. In addition to the Grammys and the twenty-one multiplatinum albums, Aerosmith was inducted into the Rock 'n' Roll Hall of Fame in 2001 and they are the subject of several documentaries, including a film dedicated to Joey and his lasting influence, called It's About Time. Joey lives south of Boston, Massachusetts.