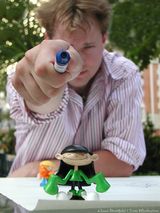 Mr. Warburton is the award-winning creator of Cartoon Network's smash hit series Codename: Kids Next Door. He has also worked as a director and designer for other popular shows, such as Sheep in the Big City, Disney's Pepper Ann, and nearly eleventy billion commercials. His secret hideout is in Brooklyn, New York, where he lives with his superhero wife and two superpowered sons. This is his first children's book.