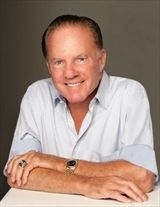 A New York Giant for twelve seasons, Frank Gifford received the NFL's Most Valuable Player Award in 1956 and was inducted into the Pro Football Hall of Fame in 1977. He was a sports broadcaster for more than thirty years—including twenty-seven years in the booth for ABC's Monday Night Football. He lives in Greenwich, Connecticut, with his wife, Kathie Lee Gifford, and their children.