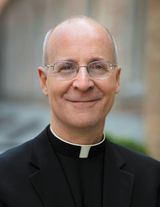 Rev. James Martin, SJ, is a Jesuit priest, editor at large of America magazine, consultor to the Vatican's Dicastery for Communication, and author of numerous books, including the New York Times bestsellers Jesus: A Pilgrimage, The Jesuit Guide to (Almost) Everything and My Life with the Saints, which Publishers Weekly named one of the best books of 2006. Father Martin is a frequent commentator in the national and international media, having appeared on all the major networks, and in such diverse outlets as The Colbert Report, NPR's Fresh Air, the New York Times and The Wall Street Journal.  Before entering the Jesuits in 1988 he graduated from the Wharton School of Business.