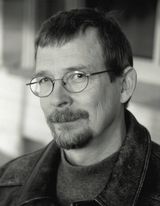 Robert Neubecker is the author and illustrator of the acclaimed WOW! books, which include Wow! City!, Wow! School!, and Wow! Ocean!, as well as the illustrator of John Lithgow’s I Got Two Dogs and Sarah Weeks’s Sophie Peterman Tells the Truth. His books have been named ALA Notable Books, and his work is often included in the Society of Illustrators Original Art Show. Robert is also a regular contributor to many national media publications, including the New York Times, Slate.com, and the Wall Street Journal.