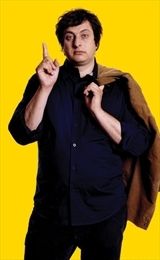 Eugene Mirman is a New York City-based comedian, writer, and actor. He plays the landlord on HBO's Flight of the Conchords and has a half-hour special on Comedy Central. His first album The Absurd Nightclub Comedy of Eugene Mirman was voted Best of 2004 by Time Out New York and The Onion. He has four hundred children and lives in outer space.