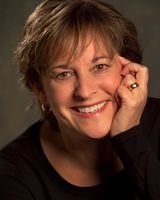 Jody Feldman has always loved riddles and brainteasers and word games, and she lives in a city on a river whose name contains four s's, two p's, and four i's. Jody has written as many books for young readers as there are players in a doubles tennis match. To find out how many brothers she has, take the number of bases on a baseball diamond and divide it by the number of times Grover Cleveland was president of the United States.