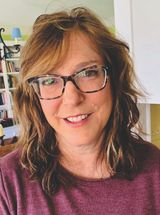 Carolyn Crimi received her MFA in writing for children from Vermont College in 2000.She has published over fifteen books, including Dear Tabby, Don’t Need Friends, Boris and Bella, Henry & the Buccaneer Bunnies, Where’s My Mummy?, and I Am the Boss of This Chair. Her book There Might Be Lobsters won the Golden Kite Award in 2018 for Picture Book Text, and her middle grade debut, Weird Little Robots, was named a BEA Book Buzz pick. Carolyn has received over thirty state awards and award nominations and was given the Prairie State Award in 2012 for her body of work.