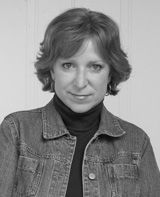 Marlane Kennedy moved to Circleville, Ohio, at age eleven. She participated in many Pumpkin Show parades as a child, but never tried growing her own giant pumpkin. But after writing Me and the Pumpkin Queen, she planted her own Howard Dill's Atlantic Giant seed and grew a 250-pounder, pictured above, that took fifth prize in her local fair. Marlane Kennedy is also the author of The Dog Days of Charlotte Hayes. She lives in Wooster, Ohio, with her husband and three children.