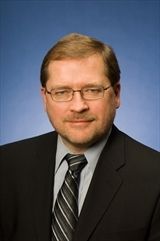 Grover Norquist is president of the taxpayer advocacy group Americans for Tax Reform, which was founded in 1985 at President Reagan's request. He chairs the "Wednesday Meeting," a weekly gathering of more than 120 elected officials and political activists, and he serves on the board of directors for both the American Conservative Union and the National Rifle Association. Voted one of the fifty most powerful people in Washington, D.C., by GQ magazine in 2007, Norquist, his wife, Samah, and their daughter, Grace, live in Washington, D.C.