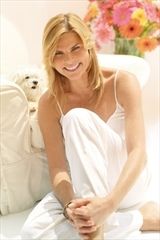 As the granddaughter of the illustrious author Ernest Hemingway, Mariel Hemingway was destined to be in the public eye. But at just thirteen years old, Mariel became famous in her own right as she made her feature film debut in Lipstick. Four years later, she earned an Oscar nomination for her role in Woody Allen's film Manhattan. Mariel is an actress, model, yoga instructor, mother of two teenage girls, and one of the leading voices for holistic and balanced living. She is the author of Mariel Hemingway's Healthy Living from the Inside Out.