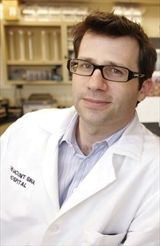 Dr. Sharon Moalem is an award-winning neurologist and evolutionary biologist, with a PhD in human physiology. His research brings evolution, genetics, biology, and medicine together to explain how the body works in new and fascinating ways. He and his work have been featured on CNN, in the New York Times, on The Daily Show with Jon Stewart, on Today, and in magazines such as New Scientist, Elle, and Martha Stewart's Body + Soul. Dr. Moalem's first book was the New York Times bestseller Survival of the Sickest. He lives in New York City.