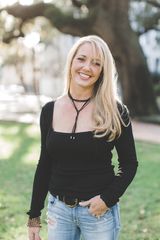 Kimberly Dean is a children’s author, artist, and yoga enthusiast best known as a NYT bestselling author and co-parent of children’s book character Pete the Cat. Before fulfilling her dream of becoming a full-time author and artist, she worked for the State of Georgia, leaving the Governor’s Press Office in 1998 to pursue her art.

She began selling her work at art festivals in 1999 and opened a small art gallery in 2003. She dabbles in multiple mediums and enjoys experimenting with new styles and techniques. She says of her job, “I love what I do!  Work is like going to kindergarten everyday!”

In 2004, she began collaborating with fellow artist James Dean to create children’s books about Pete the Cat. The Misadventures of Pete the Cat, a coffee table book of James’s art, was released in 2006. Her dreams of becoming a published children’s book author became a reality in 2013 with the release of her first children’s book, Pete the Cat and His Magic Sunglasses. She has now written many of the Pete the Cat books, as well as started another series starring her own characters Willow and Oliver.

Kimberly lives in Savannah with her dog, Gypsy, and cat, Phoebe. Her children and grandchildren live nearby, and her favorite word is “Lovie,” which is the name her grandchildren lovingly call her.