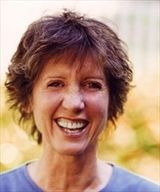 Geri Larkin gave up a successful career as a management consultant to become a Buddhist teacher. A practicing Buddhist since 1988, she completed seminary and was ordained in 1995. Four years later, she decided to start a Zen meditation center in the heart of inner-city Detroit. She is the author of Stumbling Toward Enlightenment, Building a Business the Buddhist Way, Tap Dancing in Zen, First You Shave Your Head, and The Still Point Dhammapada.