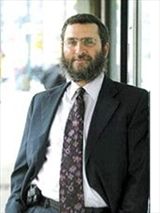 Shmuley Boteach is host of the daily national radio program The Rabbi Shmuley Show on Oprah & Friends and Sirius XM Satellite Radio and host of the award-winning national television show Shalom in the Home on TLC. He is also the international bestselling author of twenty books, including the New York Times bestselling Kosher Sex and Ten Conversations You Need to Have with Your Children. In 2007, Boteach was labeled "a cultural phenomenon" and "the most famous rabbi in America" by Newsweek, and was also named one of the ten most influential rabbis in America. He has been profiled in many of the world's leading publications, including Time, Newsweek, the New York Times, London Times, Los Angeles Times, Chicago Tribune, and Washington Post. Shmuley and his wife, Debbie, have nine children.