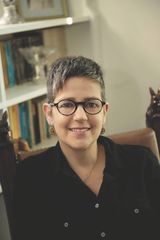 New York Times–bestselling author Megan Whalen Turner is the award-winning author of six novels set in the world of the Queen’s Thief. These epic novels of intrigue and adventure can be read in any order, but were published as follows: The Thief, The Queen of Attolia, The King of Attolia, A Conspiracy of Kings, Thick as Thieves, and Return of the Thief. Megan Whalen Turner has been awarded a Newbery Honor and a Boston Globe-Horn Book Honor and won the Los Angeles Times Book Prize for Young Adult Literature. She has won the Mythopoeic Fantasy Award for Children’s Literature and was a finalist for the Andre Norton Award. She worked as a bookseller for seven years before she started writing. Her first book was a collection of short stories called Instead of Three Wishes.