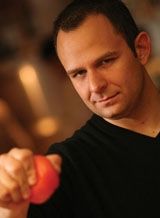 Fabio Trabocchi discovered his passion for cooking as a young boy, inspired by his father's love for food from his native region of Ancona, Italy. At the age when many chefs are still sharpening their skills and palates, he has already earned an impressive foothold in the culinary world. After winning the London Carlton Restaurant Award for Best New Chef in 1999, Fabio Trabocchi moved to the Washington, D.C., area to create his vision and concept for Maestro, where is the chef. Both he and the restaurant have won several accolades, including Maestro's being named by Gourmet as one of the World's Best Hotel Dining Rooms. In 2004 and 2003, he was nominated for Rising Star Chef by the James Beard Foundation, and in 2006 he won Best Chef: Mid-Atlantic, an award he also was nominated for in 2005.