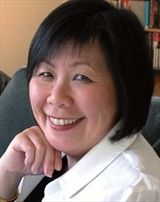 Rosemary Gong is a third-generation Chinese American. Born and raised in California, she and her family were the only Asians in their Central Valley town, school, and church. A graduate of San Jose State University's School of Journalism and Mass Communications, she moved to San Francisco to join Saatchi and Saatchi Corporate Communications Group. Chinatown was her choice of residence -- just around the corner from her grandparents. There, she developed an affinity for the places and the customs inherent in her culture. Rosemary shamefully admits her Chinese vocabulary totals around twenty-nine words. Thus, she considers one of her greatest achievements to be ordering a plate of noodles in her native Cantonese.