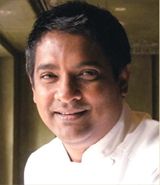 Floyd Cardoz was born in Bombay and raised in that city and in the fabled trading center of Goa. He trained as a biochemist before he discovered where his real passion lay—in a restaurant kitchen. After culinary school in India and Switzerland, he moved to New York City. He worked in Gray Kunz's legendary kitchen at Lespinasse and rose to become chef de cuisine there. In 1997, Cardoz teamed up with New York restaurateur Danny Meyer to create Tabla, which was given three stars by the New York Times shortly after it opened.