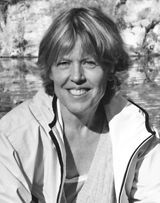 Joan Ackermann is a playwright, journalist, and screenwriter. Over a dozen of her plays have been published and produced around the country, and her adaptation of her play Off the Map was released as a feature film directed by Campbell Scott. Joan is the cofounder and Artistic Director of Mixed Company, a twenty-five-year-old theater in Great Barrington, Massachusetts. A Special Contributor to Sports Illustrated for seven years, she has freelanced for many magazines, including Time, The Atlantic Monthly, and Esquire. She lives in the Berkshires, where she enjoys being a part-time hiking guide.