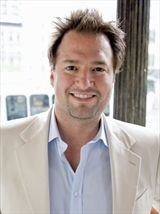 Jason Denton is involved in some of New York City's most successful restaurants. First on the panini scene was 'ino. Broadening the 'ino concept of bruschetta, tramezzini, and panini, 'inoteca added the authentic Italian small plates for which it has been critically praised. Along with Mario Batali and Joseph Bastianich, Denton is a partner in Lupa Osteria Romano, one of New York City's best Italian restaurants, as well as the newly opened Bar Milano. Food & Wine, in their annual tastemaker awards, dubbed Denton an "Italian food emissary." He lives with his wife, Jennifer, and sons, Jack and Finn, in New York City.