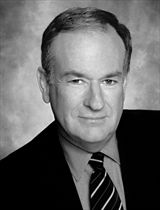 For more than thirteen years, three-time Emmy Award winner Bill O’REillyhas presided over The O’Reilly Factor on the FOX News Channel, the highest-ratednews program on cable. Prior to that, he served as a national correspondent for ABCNews and as an anchor of the nationally syndicated news magazine program InsideEdition. He is the author of numerous megabestsellers, including A Bold Fresh Pieceof Humanity, a deeply personal memoir that has sold more than one million copies.