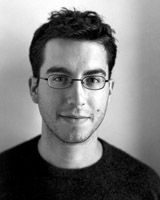 Jonathan Safran Foer was born in 1977. He is the editor of A Convergence of Birds, and his stories have been published in The Paris Review and The New Yorker. This is his first novel, which appeared on Best Books of 2002 lists internationally, won several literary prizes, including the National Jewish Book Award and The Guardian First Book Award, and has been published in twenty-four countries.