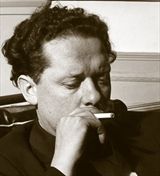 Dylan Thomas, born in 1914, began his career as a journalist in his native Swansea, Wales. He then moved to London where he worked in broadcasting and wrote film scripts, prose and drama to earn enough money to enable him to write what he most wanted to—poetry.

He lived colorfully, even recklessly, until his untimely death in New York City in 1953. One of the 20th century’s most treasured writers, Dylan Thomas was a master craftsman of poetic complexity and richly obscure imagery. Thomas’s genius is made clear in this landmark recording through the everlasting gift he has given the word—his voice.