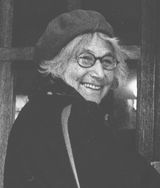 Vera B. Williams began her career in children’s books by illustrating Hooray for Me!, written by Remy Charlip with Lilian Moore. Her beloved A Chair for My Mother won multiple awards, including a Caldecott Honor, and “More, More, More,” Said the Baby also received a Caldecott Honor. Vera B. Williams was the recipient of the Jane Addams Children’s Book Award; she was awarded the 2009 NSK Neustadt Prize for Children’s Literature; and she was the US nominee for the Hans Christian Andersen Award in 2004. Vera B. Williams died on October 16, 2015, shortly before this book was completed.